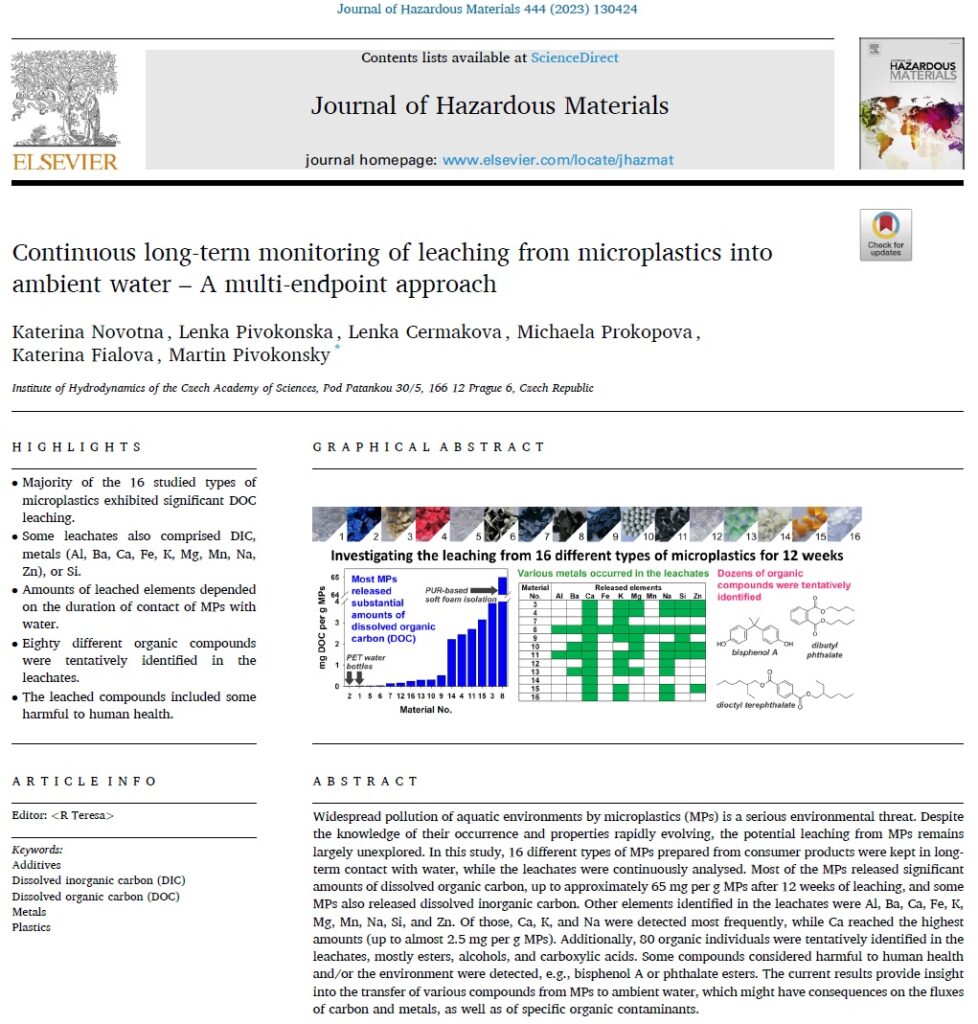 Recently, the occurrence of microplastics in aquatic environments has gained considerable attention of both the public and researchers. As a result, the knowledge on the abundance, sizes, shapes, or polymer composition of microplastics is growing. However, how do the microplastics interact with ambient water? The new study “Continuous long-term monitoring of leaching from microplastics into ambient water – A multi-endpoint approach” recently published in Journal of Hazardous Materials contributes to answer this question.

Microplastics are composed of synthetic polymers – But not only

Microplastics are generally defined as plastic debris not exceeding the size of 5 mm. They can be composed of various polymers; for example, polypropylene (PP), polyethylene (PE), or polyethylene terephthalate (PET) microplastics are frequently found in aquatic environments. However, besides the polymers, plastics (and therefore also microplastics) comprise a range of additives that are aimed to specifically modify properties of the materials. To illustrate, additives may be divided into plasticisers, fillers, stabilisers, antioxidants, flame retardants, pigments, etc. based on their function. There are hundreds of compounds that serve as additives, while the additives may comprise up to approximately 70% of a plastic material in terms of its weight. Thus, the overall composition of (micro)plastics may be very diverse, as well as the range of compounds that might potentially leach out.

In the current study, 16 different types of microplastics prepared from various consumer products were kept in contact with water for 12 weeks, while the leachates were continuously analysed. It was revealed that most of the investigated microplastics released substantial amounts of dissolved organic carbon (DOC); the maximum value was approximately 65 mg DOC per 1 g of microplastics. The highest DOC leaching was observed for softened plastics based on polyurethane (PUR), polyvinyl chloride (PVC), and nitrile butadiene rubber (NBR). Additionally, some of the leachates comprised also dissolved inorganic carbon and/or one or more other elements – on the whole, aluminium, barium, calcium, iron, potassium, magnesium, manganese, sodium, silicon, and zinc were detected. Among these, the leaching of calcium was the most frequent and also the highest (up to approximately 2.3 mg per 1 g of microplastics). Furthermore, around 80 chemical individuals were tentatively identified in the leachates, including some compounds harmful to human health and to the environment, such as bisphenol A or phthalate esters. Many of the compounds are recognised as additives or intermediates in chemical syntheses; however, the leachates of microplastics might also comprise e.g. degradation products of the polymers.

To conclude, the current results provide an evidence of leaching of various compounds from microplastics into ambient water. Attention should be paid not only to the occurrence of specific chemical individuals associated to the presence of microplastics in aquatic environments, but also to the potential influence of microplastics on the content and transport of distinct elements in water.